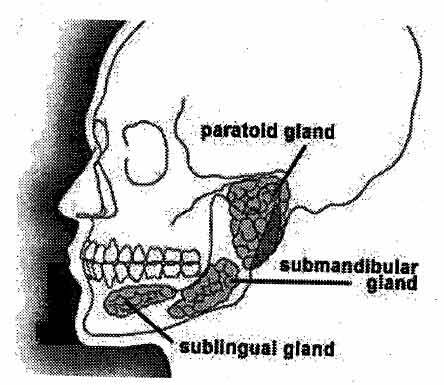 Below each ear, behind the mandible lie the parotid glands, largest of the three,e pairs of glands that make up what is referred to as the salivary glands. The other two pairs are known as the submaxillary and sublingual glands. Together, they secrete saliva which insures the first stage of digestion.

Sufficient chewing of foods is important for this reason, but recent research has shown it is important also from the standpoint of taste, which is related to the conditioned (learned) reflexes stimulated by the sympathetic and parasympathetic division of the autonomic nervous systems. (When you see a lemon, you secrete saliva.) Food in the stomach also stimulates what is known as the inborn reflex. Salivary glands are unique in that they are not activated by any known specific hormone.

The shape of the parotid is triangular, similar to the prism, and is composed of two partly overlapping leaves, continuous, behind, at a so-called isthmus. The parotid terminates at a minute duct orifice opposite the second molar.

In addition to the six major glands, there are numerous other glands located in the floor of the mouth, under the tongue and in the mucous membranes of the mouth and pharynx.

When too much saliva is generated, poisoning is always suspect, such as with mercury or potassium iodide, especially. When too little saliva is secreted, which is called “aptyalism,” it is often of a nervous origin, and psychiatrists begin to look for deep-seated fears. Dry mouth associated with fevers of overexertion are not included.

Parotid function, in addition to being important in the formation and secretion of saliva, almost parallels the function of the pituitary gland, particularly when its function is depressed; it is also associated with development of the sex glands.

Saliva consists of water, inorganic salts, such as are found in body fluids, and organic solids, principally mucin and the starch-splitting enzyme, ptyalin, one of the amylases. Most important among the inorganic salts are sodium, potassium and calcium. Study of the endocrine glands emphasizes teamwork. It is not unusual when one gland, or one of

a pair of glands, functions below optimum, for another gland to “take over” and work overtime to compensate. This in turn can lead to exhaustion of the compensating gland if the condition is not corrected.

Keen observation has shown that when saliva is thick and ropey, the possibility of hyperthyroidism should be considered; when the saliva is watery, the opposite, hypothyroidism, should be investigated. Ropey saliva has also been associated with pellagra (Sullivan & Jones) as reported in “Studies of Deficiency Diseases,” by McCarrison, which accentuates the subtle influences of total nutrition and the equally subtle deficiency conditions too seldom identified.

Undoubtedly, foods grown with the use of synthetic fertilizers which alter or depress bacterial action which interferes with plant absorption of minerals, has had a profound and tragic effect upon a brainwashed society.

Previous Post: « The Importance of the AdrenalsBy Diagnos-Techs
Next Post: Hypnosis and Self Hypnosis in HealingBy Gerard V. Sunnen, M.D. »