FDA How Did It Come To Be and Where Is It Going?By Consuelo Reyes

The Food and Drug Administration (FDA) is processed foods compared to fresh perishable produce, as well as the lower cost of new medicines, the oldest U.S. federal consumer “watchdog” agency, founded by act of Congress in 1906. But legislators did not come easily to the idea that a national entity was needed to protect the public from the dangers of an unfettered marketplace. Indeed, it could be more aptly said that the U.S. Congress was dragged to action, kicking and screaming not unlike the situation that exists today. A look back at this twisted history may be instructive for the present.

In the early days of the country, there was no federal regulation of the marketplace. Pressure for national laws came about only in the mid 19th century as the Industrial Revolution ushered in great changes in food and drug production. Discoveries in chemistry led to the development of new medicinal preparations which competed with traditional botanicals as the primary pharmacopeia. Technology was altering growing methods and creating advances in food processing. Improved transportation encouraged the national market for foods and medicines that heretofore had been produced locally. Increasingly, ways were needed to resolve the clashing interests of traditional enterprises versus those of the new industries all vying for the hearts and dollars of the public.

While the consumer may have benefited from the convenience and lower prices of preserved and the heightened competition opened the door to adulteration and fraud.

Natural, local producers appealed to Congress to enact laws that would regulate what they saw as unfair competition and threats to public health. Lobbyists for the increasingly powerful food and drug technologies fought to keep government from interfering with the basic law of supply and demand. It was the classic tug-of-war between uncontrolled freedom vs. the welfare of society as a whole. By the end of the 19th century, each state had its own food and drug statutes, often in direct contradiction to its neighbors. The situation was, in short, a mess, compelling one jam maker to complain: “We have to manufacture differently for each state.” Farmers in agrarian states campaigned against the shady processors of adulterated fertilizers, deodorized rotten eggs, revived rancid butter, substitution of glucose for honey practices which they said deceived the public and endangered health. A populist movement was on to set national standards. But Congress was unmoved. At this point, there were so many conflicting voices that the public-at-large was highly confused, but not particularly exercised. 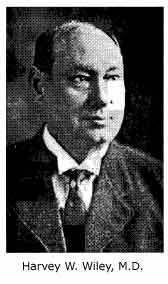 It wasn’t until one individual, Harvey W. Wiley, M.D., became the leader of the “pure food crusade” that Americans really got roused to the necessity of federal oversight. Wiley, a highly regarded chemist and physician, had been State Chemist of Indiana and professor at Purdue University. In 1883 he was appointed chief chemist of the Department of Agriculture and went to Washington, D.C. There he made the study of food and drug adulteration his bureau’s principal business. At first, he was merely outraged with what he saw as basically harmless fraud. The more he delved, however, the more he began to discern genuine threats to health and felt impassioned to bring about regulatory action.

Dr. Wiley started touring the country making speeches, like a preacher, spreading the gospel of pure food and crusading for a national law. Fortunately, besides his excellent scientific credentials, he was a gifted writer, conversationalist and orator who was able to combine clarity and homespun wit with moral passion. But this was tricky business, demanding patience and diplomacy to forge a bill that so many highly charged opposing self-interest groups could get behind. His skills made him the right man for the job, though he was certainly not without his fierce adversaries who did their best to portray him as a hysterical fanatic (not unlike what goes on today).

In the midst of this, Dr. Wiley and his research team continued their scientific studies investigating the health dangers of chemically preserved and processed foods. The findings were reported colorfully in the press as “Poison Squad” experiments and made an ever expanding audience aware of contamination and corruption that demanded regulation. Still, no bill was signed into law. Southern conservatives, for instance, challenged the constitutionality of such legislation saying, in the words of one Georgia congressman, “The Federal Government was not created for the purpose of cutting your toe nails or corns.”

Change occurred only after a series of events which threatened the economic well-being of the meat industry. ‘These included calls to protect trade against exaggerated European charges that American pork had caused trichinosis, and again when, during the Spanish-American War, troops got sick and packers were accused of shipping “embalmed beef.” Then in 1906 the public was hit in their hearts, minds and stomachs with the publication of Upton Sinclair’s novel, The Jungle. Sinclair described filthy conditions in Chicago’s meat packing plants, subsequently confirmed by government inquiry. When meat sales plummeted in half, President Theodore Roosevelt entered the fray, pushing for a meat inspection bill to protect the domestic market.

Dr. Wiley, buoyed by his increasingly vociferous coalition, entreated the President to go further for a broad food and drug bill and Roosevelt listened. (Of course, there were no instant polls, but, one way or another, Roosevelt got the message that the public needed firm reassurance in the marketplace and in his leadership.) At last, in a whirlwind of compromise, the Federal Pure Food and Drugs Act became law in 1906!

The bill forbade interstate and foreign commerce in adulterated and misbranded food and drugs. Offending products could be seized and condemned; offending persons could be fined and jailed. Drugs had either to abide by standards of purity and quality clearly set forth or meet individual standards chosen by their manufacturers and stated on their labels. The law prohibited the substitution of ingredients to reduce quality, the addition of deleterious ingredients, etc. The law sought to protect the consumer from being deceived or harmed, primarily according to the assumption that the average person was wise enough to decide his own course if given accurate information provided on labels. Advocates of pure food celebrated the law as a triumph for the people, while opposing business interests consoled themselves that the bill restored public confidence in industry without being too tough or readily enforceable.

Dr. Wiley knew that some fuzziness existed in the bill. But he was optimistic that Congress had made a good beginning and would back it up with enforcement and address some of the weaknesses. The bill gave Wiley’s Bureau of Chemistry the task of spotting violations and preparing court cases, so he proceeded to build up the inspection capabilities of the agency, which evolved to become known as the Food and Drug Administration. Many important protections were established, but his tenure was fraught with controversy as competing interests questioned at every turn the letter of the law. The opposition grew proficient in the tactics of delay and misinformation. Perhaps out of frustration, Dr. Wiley resigned in 1912 and became head of Good Housekeeping Magazine laboratories where he established the Good Housekeeping Seal of Approval and continued to labor tirelessly on behalf of the health of the American public until his death in 1930.

Where is the FDA that Dr. Harvey Wiley so ardently fought for? Today, when the risks are far greater, that agency is nowhere to be found. Indeed, Dr. Wiley’s concerns about food and drug contamination seem mild compared to the dangers wrought by the minefield of synthetic chemicals saturating our food and drug products today celebrated by the all powerful multi-national pharmaceutical and chemical industries, while making human guinea pigs of us all.

Today this U.S. tax-payer-supported agency is known not as the crusading consumer advocacy group of Dr. Wiley’s day, but as just another branch of the Washington bureaucracy a revolving door for industry operatives to influence policy and then return to lucrative private sector jobs. Today, though we, the tax-payers, pay the bills, more and more we see that industry calls the shots and the FDA knows. For example:

Is Dr. Wiley rolling about in his grave when he sees the direction this agency is taking? Would not the long-term interests of industry and the consumer best be served by a populace confident in our government’s ability to insure a safe marketplace? Perhaps it’s time we, the consumers, take up Dr. Wiley’s fervor and return the FDA to its original role as guardian of the public health.