Tai Chi and Your Brain 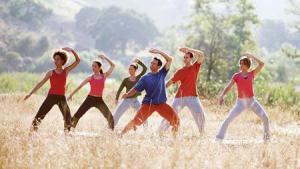 You may have seen them in the park: small groups of people in loose clothing doing weird slow motion poses. This is not some fanatical dance cult! It’s tai chi chuan, an increasingly popular, moderate form of exercise that combines deep, diaphragmatic breathing with flowing, dancelike stances – a surprisingly effective workout for all ages.

Many recent studies have shown that tai chi improves balance, leg strength, cardiovascular endurance, pulse rate, muscular flexibility, immune function, sleep quality, happiness, self-esteem, and cognitive skills like the capacity to concentrate and multitask. Even cows appear to benefit: farmers from a British dairy organization that promotes organic milk perform Tai Chi in front of cows because they believe it “can bring an additional spiritual uplift to their herds, fields and farmyards.”

A new study revealed especially impactful results on the brains of older adults who had been practicing this gentle martial art for several years. Their brains were compared to those of similarly-aged sedentary adults. The tai chi group showed significantly greater connectivity and other indicators of health in areas of the brain known to be key to decision-making and attention.

Researchers have not yet determined if tai chi is substantially better than other types of light-to-moderate workouts, like walking, yoga, weight training. However, there seems no doubt that regular practice of tai chi produces far better outcomes compared to low-impact activities such as stretching or strolling. The beauty of tai chi is that you can do it anywhere: besides in front of cows, on the beach, in the park, in your living room, etc. No special equipment is required. There are programs that integrate Tai Chi movements with golf practice to improve joint flexibility and dynamic standing balance control. Because tai chi uses the mind to harness the body’s energy, runners, swimmers and athletes in other sports practice the art to enhance their focus on posture, form, breathing and concentration.

Tai chi began in China in about the 12th Century A.D. Originally, it was a practice for fighting or self-defense, usually without weapons. Chang San-Feng, a Taoist monk, became much revered for developing the art. He had observed 5 animals – tiger, dragon, leopard, snake and crane – and concluded that the snake and crane, because of their supple movements, were the ones most capable of overcoming strong opponents. He developed sets of exercises that mimicked the motions of these 2 animals, emphasizing flexibility over sheer strength and adding important philosophical concepts. Over time, people started using tai chi for health and a form of moving meditation.

Low-cost Tai chi classes are offered in many community centers nationwide. You can find a program near you by going to the American Tai Chi and Qigong Association website: americantaichi.net. See the video below to get a headstart.