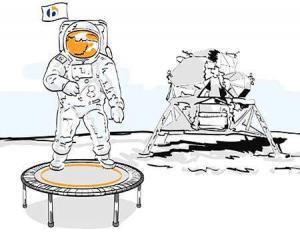 The simple act of bouncing on a rebounder (mini-trampoline) is a uniquely powerful form of exercise. While most types of workouts target specific muscles or just increase cardiovascular function, rebounding uses the forces of acceleration and deceleration to activate literally every cell in the body without stressing any particular part.

The idea of rebounding has been around for quite a while. However, it really picked up steam in the 1980’s when NASA was looking for the most effective way to counteract the harmful effects of weightlessness on the body, namely, that after as little as 14 days in space, astronauts can lose up to 15% of bone and muscle mass. After conducting studies comparing the benefits of various forms of exercise, they found rebounding to be the superior choice.

NASA had narrowed its search down to two basic modalities: running on a treadmill and bouncing on a rebounder.  When they compared the restorative effects of each, they found that both produced equal measures of G-force (resistance to gravity). In running, however, there were higher rates of foot, shin and knee problems because the foot and leg absorb much of the force. In rebounding, the force was equally distributed with a lower level at the ankle than on a treadmill. Thus, the whole body benefits without excess stress on feet and legs.

NASA researchers discovered other advantages to rebounding, such as a significantly  more efficient use of the same amount of oxygen as running. This means you get more benefit with less oxygen and less stress on the heart. More bang for the buck – the reason why rebounding is appropriate for all age groups and levels of conditioning. They also concluded that the acceleration and deceleration (up and down motion) of rebounding provides benefits on a cellular level and at a greater rate than other forms of exercise like running.

Subsequent studies have shown than the up and down motion of rebounding is beneficial for the lymphatic system which runs in a vertical direction in the body. The lymphatics are a vital part of the immune system, comprised of a network of vessels that carry a clear fluid called lymph towards the heart for eventual elimination. This fluid contains infection-fighting white blood cells that pick up and destroy foreign substances in the body – viruses, bacteria, cancer cells. Exercise, especially the up and down motion, keeps the lymph fluid moving so it can flush out toxic material efficiently which is so important for maintaining health.

Basically, all you need is a rebounder. These are available in many price ranges online or in athletic equipment stores. The more expensive ones may have better springs and are perhaps a little quieter. But even the cheapest ones do the job.

Try to get into a daily rebounding habit. It’s best to be barefoot so you don’t slip. Everyone should start with the gentle “health bounce.” This means your feet remain in contact with the mat while the knees bend and the body moves up and down. The “health bounce” is sufficient to gently strengthen the whole body and gain all the benefits of rebounding.

If you feel more ambitious and want to jump so your feet leave the mat or perhaps jog in place, be careful. Acrobatics are not the goal! (Some rebounders come with a crossbar to steady you.)

About 15 minutes or more per day on the rebounder is recommended, which can be done in multiple 3-5 minute sessions, depending on your schedule. Best to keep a moderate pace, so you’re breathing slightly faster, but not uncomfortably. Wait a bit after eating or drinking.

For detox, rebound at least 15 minutes each day, perhaps in 3 five-minute sessions. For weight loss, rebound for 15-20 minutes, moderate intensity all in one session, at least 3 times a week.

While bouncing, many people like to move their arms to enhance the whole body experience. Try waving your arms as though you’re conducting an orchestra. This opens the chest and increases oxygen uptake (and may be one of the reasons why conductors famously live longer than many in other professions). Rebounding is a great warm-up for any activity. Madonna and her dance team are known to use the rebounder to get warmed-up before performances and for general conditioning.

A summary of the many benefits of rebounding:

“Body acceleration distribution and O2 uptake in humans during running and jumping” – Journal of Applied Physiology
video: NASA Study: Rebounding vs. running on a treadmill
“Exercise like an astronaut” – Well & Good
“The Health Benefits of Rebounding” – Wellness Mama

Previous Post: « MOVE IT OR LOSE IT! – Exercise for a Healthy Body and Mind By FACT
Next Post: Posture Affects Health and More By Lloyd Percival »