Why the War on Raw Milk? 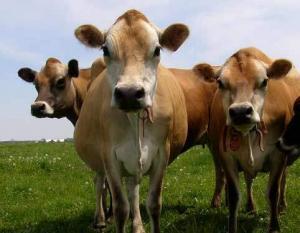 Raw (unpasteurized/unhemogenized) milk has been a staple of healthy nomadic and agricultural societies going back as far as 9,000 years. Today, in Europe and many other countries raw milk products are readily available and highly valued for their life-sustaining properties. Yet in the US, the sale of raw dairy is banned or severely limited in most of the 50 states. It is not unusual for merely suspected violators to be raided by gun-toting government teams in the dead of night, severely charged and, far too often, financially ruined. What is going on?

The government refrain goes something like: raw milk is a major source of foodbourne illness; therefore, we must protect you! However, data from the U.S. Centers for Disease Control (CDC) totally mock this claim. CDC found that between 1999 and 2010 there were on average 42 cases per year of “confirmed” or “suspected” illness out of about 9.4 million raw milk drinkers (approx. 0.0005%). (Today, the number of milk drinkers is estimated at 12-13 million.) Given the fact that there are a reported 48 million cases of foodbourne illnesses each year from all foods, raw milk is pretty small potatoes and certainly not worth the overblown national focus and expenditure of resources. Indeed, raw milk statistics are more in line with the well accepted fact that consuming any food carries some risk of illness or adverse reaction.

Clearly, the war on milk is not driven by food safety concerns. The threat, in the eyes of our government “watchdog” agencies is far more insidious: the threat to big agri-business!

The U.S. Food and Drug Administration (FDA) requires pasteurization of milk to protect the public from possible deadly pathogens in raw milk. The reality is, however, if cows are raised as nature intended (free-range, green grass-fed, with plenty of fresh air and sunshine and no antibiotics or harmful vaccines that impair their immune system), then they simply do not get sick or become colonized with pathogenic bacteria in the first place. Thus, there is no need to pasteurize their milk.

However, cows raised in concentrated animal feeding operations or CAFOs (factory farms) are NOT raised in a way that makes their milk suitable for drinking raw – typically fed high-protein, soy-based (mostly GMO) feeds, cramped in filthy lots all day instead of free grazing in grassy fields. CAFOs are ideal disease-producing facilities, requiring antibiotics and growth hormones to keep animals alive as cheaply as possible to maintain high profitability. The milk from these unhealthy CAFO cows must be pasteurized to kill pathogens, though the milk retains the dead pathogens. The process also kills most of the inherently beneficial properties in milk, while the hormones and antibiotics wind up in the milk. Pasteurization enables CAFO farmers to avoid the costs of cleaning up their operations, which would likely mean lowering production volume needed for big profits. Following minimal FDA guidelines also protects them from lawsuits by people who might be sickened by their products.

While the way CAFO cows are raised negatively affects the quality of the milk produced, pasteurization further degrades quality:

What does raw milk have that pasteurized CAFO milk doesn’t?

Basically, raw milk from clean, healthy, grass-fed cows is a totally different substance from pasteurized CAFO milk. Raw milk is a profound healing agent, full of nutrients and other factors your body needs to thrive, such as:

In light of current highly restrictive laws, why are more and more people going to the trouble of buying raw milk?

The important thing to remember is that milk will only be as healthy as the cows that produce it. Look for local dairy sources with high standards. Find out what conditions cows are raised in. Do the cows look clean (instead of covered in filth and manure with a strong stench, typical in industrialized farms)? A great resource for locating raw milk all over the U.S. is RealMilk.com, sponsored by Weston A. Price Foundation.

What can be done to make healthy food choices more available?

In the long run, the problem is about individual freedom: the right to choose what we wish to eat. At this point in time, our government agencies and policymakers are essentially in the pockets of big agribusiness which currently supplies about 99% of national food supplies and has no financial interest in changing course. Despite increasing demand for highly nutritious foods like raw milk, the industry uses misinformation and intimidation to try to hold on to customers. Our options for obtaining the highest quality edibles – non-GMO, unirradiated, pesticide-free, etc. – are woefully limited.

The answer is to get involved in the struggle! Become knowledgeable about the plight of small farmers to survive and thrive in this environment. Take a look at the film Farmageddon, the Unseen War on American Family Farms. This documentary tells the story of small family farms that were providing safe, healthy foods to their communities but were forced to stop, sometimes through violent action, by agents of misguided government bureaucracies. The film highlights the absurdity of wasting valuable public resources on these operations when the real source of food safety problems most often lies with the industrial food chain.

You might also consider making a donation to the Farm-to-Consumer Legal Defense Fund (FTCLDF) which helps unfairly targeted farmers stay in business in the face of massive financial and legal government pressure. FTCLDF supports sensible legislation and lobbying efforts. We also strongly suggest you become a member of the worldwide Weston A. Price Foundation for Wise Traditions in Food, Farming and the Healing Arts – an incredible information resource.

“FDA Says: Drinking This Natural Food is a Crime” by Dr. Mercola

Previous Post: « Why a Little Bitter Is Better
Next Post: A Case History: Bone and Lymph Cancer By Lou Dina »