What About the Paleo Diet? 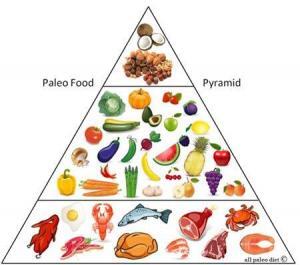 There is little doubt that poor food choices play a major role in today’s epidemic of cancer, heart disease, diabetes and other chronic degenerative diseases.  But is eating like cavemen the answer?

The Paleo diet is “hot” these days. It’s the latest health trend since vegan and gluten-free became “in” with the celebrity chef and movie star set. But what exactly is it? The Paleolithic period (“Stone Age”) encompassed several million years – from the beginning of human existence to around 12, 000 years ago. Those early humans were hunters and gatherers who ate what they could forage locally and seasonally – vegetables, fruit, nuts, roots, and meat from wild fowl, bison and the like. Dr. Loren Cordain, so-called founder of today’s Paleo Movement, used this as the touchstone for a dietary regimen restricted to lean meat, seafood, nuts, fresh fruit and non-starchy vegetables. That’s it. No dairy, no grains or legumes, sugar or salt.

Though this modern incarnation of the Paleo Diet may have advantages over the typical American fare of highly processed, chemicalized foods, refined sugars and grains, etc., it’s nothing like what the hunter-gathers actually scraped by on for their 20-40 year life spans. It also has serious nutritional flaws for today’s humans. Over thousands of years, our food sources have changed and our bodies have adapted to more wide ranging dietary needs. A strict adherence to Cordain’s “Paleo Diet” is out of step with that and, thus, over time, could present serious health problems. Namely, it’s too high in protein, too low in fats and too low in carbs.

Today’s meat is nothing like that of the hunter-gatherer, who gorged on the occasional kill of lean wild game, usually devoured raw. The meat produced from our farm-bred animals is totally different nutritionally, whether factory-farmed or pastured, though pastured would be closer. Unless you plan to hunt for wild game, you won’t find Paleo-type meat at Whole Foods.

Moreover, the Paleo diet recommends high amounts of flesh protein, 30-35% of the daily intake. This is excessive and creates stresses, especially for the kidneys. Weston A. Price Foundation suggests around 20%. total protein per day. Most people, even those exercising aggressively, need no more than 2-4 oz. of flesh protein a day.

Paleo also includes regular consumption of lots of fish and other seafood. In ancient times there were no synthetic chemicals polluting lakes and oceans, but today it’s difficult to find seafood without toxic build-up. So it would be wise to not overdo fish consumption, especially from fresh water and stick with safer salt water options like wild Alaskan salmon, sardines, anchovies, white flesh ocean fish like cod, halibut, etc.

The Paleo Diet is about 23% carbs which may result in weight loss at first – a major reason for the diet’s popularity for many people. Low carbs may also be useful to normalize blood sugar or resolve an insulin or leptin resistance situation.  Over time, however, carb intake below 25% will cause your body to adapt to a scarcity of glucose, which can cause hormonal changes that can negatively impact your blood lipids. If you’re extremely healthy, your body may be able to manufacture some glucose from protein, but others may not do so well. If you get infections, you raise your body’s glucose needs and could really get into trouble. In general, such a low carb intake is stressful to the body.

When carbs are too low, there is going to be a lack of energy. The tendency for those looking for more umph on the low carb Paleo Diet is to replace carbs with more protein, which, of course, creates more stress on the body, including increasing cancer risk.

The Paleo Diet calls for 39% fat which is not enough for optimal health or, importantly, taste. When food is satisfying, there’s little need to overeat or grab for sugary quick fixes. Most people need anywhere between 50-85% high quality fats. Moreover, because of the emphasis on lean meats in the Paleo plan, there is an imbalance in types of fats, specifically not enough saturated which supply crucial Vitamins A and D, Omega-3 fatty acids, cholesterol, etc., vital for brain and overall body function. High quality fats like avocados, butter from grass-fed animals, unrefined coconut oil, nuts should also be liberally consumed. Eggs (especially yolks) are a great source – the Paleo Diet eschews yolks in favor of the whites (protein).

Cavemen did not keep cows so the Paleo Diet also shuns dairy, particularly raw, full fat products from grass-fed cows which are valuable nutrient dense foods. Rather than bother with fermented foods such as yogurt, sauerkraut, cultured vegetables vital for gut and immune health as well as brain development, Paleo proponents suggest taking an occasional probiotic supplement (not available to cavemen, by the way…..). No unrefined salt allowed, like Celtic or Himalayan -important sources of trace minerals, food preservation and seasoning. No wine or unpasteurized beer (made from grains so not gluten-free), BUT, oddly, tequila is okay on an empty stomach! According to Paleo rules, tequila upholds the standards of gluten-free, low carb, low sugar.

The rules get fuzzier with the many variations of Paleo currently surfacing. For example, some advocates allow chocolate, coffee and tea; others not. A cynic might say that the whole thing has more to do with selling books than actually emulating the caveman.

The Paleo Diet has advantages over today’s typical denatured cuisine because it focuses on the use of whole, unprocessed, toxic-free foods. However, the simple truth is that it’s a very stark, unsatisfying way to eat, which is why most people cheat or don’t stay on it for very long. At best, its cold turkey, strict simplicity approach might encourage more people to transition from SAD, the Standard American Diet, to a more 21st Century life-sustaining, delicious way of eating.

Sources:
“Differences Between the Weston A. Price Foundation Diet and the Paleo Diet” by Sally Fallon Morell
“Michael Pollan Explains What’s Wrong with the Paleo Diet”
Why the Paleo Diet is Half-Baked” – Scientific American
“The Paleo Diet – Is It Right for You?”  by Dr. Mercola

For a limited time all books will now be 25% off, no minimum purchase required. If you would like a free DVD of our film Rethinking Cancer, simply put in the promo code FREEDVD at check-out.