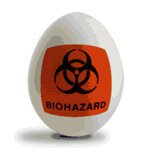 About 95% of the eggs sold in U.S. markets are produced in factory farms where some 250 million hens are jammed into wire cages so small the birds can barely move, much less ever spread their wings. An automatic feeding cart runs between cages, sometimes decapitating hens as they’re eating the chemicalized feed – usually genetically modified, grains laced with pesticides, growth hormones, antibiotics and other additives. Often feet or heads get trapped in the wires, causing slow, painful death and layers of rotting, fetid corpses – breeding grounds for salmonella and all manner of virulent bacteria.

These hens suffer from feather-loss, blisters, tumors, foot and leg deformities, osteoporosis, Fatty Liver Syndrome, Swollen Head Syndrome, heat stress, mouth ulcers, and other diseases. Veterinary care is non-existent, as hens are considered cheap and expendable. Life is so hard in the cages that birds last on average about a year and a half; under normal farm conditions chickens can live as long as 15-20 years.

Such factory farms are known as CAFOs – concentrated animal feeding operations – and they are extremely profitable. Lobbying and other strong-arm tactics have insured that regulations work in the producer’s favor. The only way to stop this cruelty is to stop buying factory farm eggs, and, after all, why would anyone want to eat them? That nicely packed dozen on your supermarket shelf is not worthy of the designation “food.” Highly acidic due to the constant stress birds live under, full of hormones, antibiotics, they lack nutritional balance or value and could possibly be infected with toxic bacterial strains, like salmonella.

The European Union and several states in Australia have essentially banned most of these cruel caging practices, but they persist here in the U.S., though there is growing awareness of the horrors. If you’re feeling strong, watch this video and join with groups, like Human Society of the U.S. and Compassion for Killing, to stop this cruelty that is a moral outrage and a danger to human health..