Onion Power: What Makes You Weep Can Get You Well! 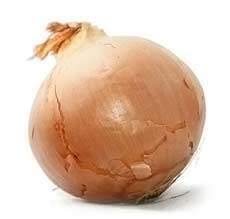 When you cut or peel an onion, volatile oils are released that stimulate the production of tears which cleanse the epithelial layers of the eyes, clearing waste and toxic chemicals from the cells. A similar detox process goes on internally when you eat onions. But that’s not all this powerful bulb can do for you. Onions are rich in quercetin, a type of flavonoid that has been shown to reduce the risk of many types of cancer. A member of the same botanical family as garlic, onions also contain allicin, which transforms into organosulfurs which can lower cholesterol, thin the blood, keep arteries flexible, protect your liver and kill cancer cells. And these are just 2 of the healing compounds contained in this age-old household staple.

Bulbs from the onion family have been traced back as far as 5,000 B.C. The ancient Egyptians worshipped them, believing the spherical shape and concentric rings symbolized eternal life. In ancient Greece, athletes ate large quantities, thought to lighten the balance of blood. Roman gladiators were rubbed down with sliced onion to firm up their muscles. In the Middle Ages, onions were so valued, they were used to pay rent or given as gifts and doctors prescribed them to aid bowel movements and erections, as well as relief of headaches, coughs, snakebite and hair loss.

Onions grow everywhere and come in hundreds of varieties of colors, shapes, textures and strengths: yellow, purple, green, white, red, brown; fingernail to baseball size; sweet and mild to knock out pungent! (The stronger the onion, the richer it is in sulfur compounds.) They are used in more dishes than any other food and in literally every cuisine in the world. It’s as if Nature seems wants to make sure that everyone has the chance to experience the great virtues of onions – and the more, the better!

Whether raw or cooked, onions have nutritional value, but raw has more healing power. The heating process neutralizes allicin and diminishes Vitamin C, chromium and other nutrients, though cooking for a short time is believed to release quercetin into the body more efficiently. So use onions in a wide range of dishes, but don’t neglect to throw in raw – sliced, grated, crushed – as often as you can. Try to use a variety of colors, sizes, strengths to get the full range of benefits. For instance, spring onions – green onions, scallions, baby onions – picked before the bulb starts to blossom, have a nice sweet, mild flavor but are not as rich in sulfur compounds as onions harvested in the fall, like yellow, globe or Vidalia. Red and purple onions are especially high in anthocyanins, the same antioxidant chemicals that make berries so nutritionally powerful.

Anti-cancer. Quercetin and cancer don’t mix. Recent research has shown that quercetin, as in onions, can slow the growth of cancer cells, stop metastasis to other parts of the body, and kill cancer cells in several ways, such as cutting off blood supply. Organosulfur compounds have similar effects. Many studies link higher intake of onions with lower rates of virulent (deadly) cancers. Overall, a consistent pattern has emerged: the more onions in the diet, especially raw, the less cancer.

An Italian study, reported in American Journal of Clinical Nutrition, compared those who ate the most onions to those who ate the fewest. The results: 56% lower risk of colon cancer in the “most” onion eaters; 25% lower risk breast cancer; 71% lower prostate; 73% lower ovarian; 82% lower esophageal; 84% lower oral; 38% lower kidney. Researchers concluded: “Our findings confirm a protective role of onions in the risk of several common cancers.”

Other studies have discovered:

Heart Disease. Flavanoids, anthocyanins and other antioxidants in onions have been shown to reduce the risk of cardiovascular and coronary heart disease. An Italian study involving over 1,400 people found that those who had one or more servings per week of onions were 22% less likely to have a heart attack than those who rarely ate the vegetable. In a study reported in Lancet, Dutch researchers measured flavonoid intake – mostly from onions, tea and apples – in 805 men. Those with the highest intake had 58% lower risk of heart disease compared to those with lowest intake.

Lower cholesterol. Wondering why Japanese women had lower rates of heart disease, researchers analyzed the diets of 115 women. They concluded that the more flavonoids eaten (mostly from onions), the lower the level total cholesterol and LDL (“bad” cholesterol) – risk factors for heart disease.

Osteoporosis. Data from the National Health and Nutrition Examination Survey with 35 million women was analyzed. It was found that perimenopausal and postmenopausal women who ate 1 or more onion a day had bone density 5% greater than women who ate onions once a month or less. As reported in the journal Menopause: “Older women who consume onions most frequently may decrease their risk of hip fracture by more than 20% versus those who rarely or never consume onions.”

Benign prostatic hypertrophy (enlarged prostate or BPH). When diet and health data for over 1,800 men was analyzed, researchers found that those who ate the most onions, along with an overall healthy diet, had 59% lower risk of developing the problem.

Diabetes. Many studies have shown that onions lower blood sugar, an important consideration for those with Type 2 Diabetes.

And Onions Are Not Just for Eating!

Here are a few home remedies using raw onions that can be surprisingly effective on common ailments:

Respiratory problems. Rich in sulfur, onions are particularly recommended for relieving coughs and colds. For dry, stubborn coughs, wash, peel and slice an entire red onion horizontally. Starting with the base of the onion, layer the slices in a bowl alternating with layers of raw honey. Continue adding layers of onion and sweetener until the entire onion is reconstructed in the bowl. Cover and allow the sweetened onion to remain in the bowl on your counter for about 12-15 hours or overnight. The next day, there will be about a cup or more of sweet syrup in the bowl. Take a spoonful as needed or use as expectorant. Surprisingly, has no onion-y taste.

Head congestion in colds and flu. Make an onion tea, an old folk remedy: Peel and slice 1 large onion. Place in a pot with 1 1/2 cups pure water. Bring to a boil, turn down the heat to a vigorous simmer for 10-20 minutes until the liquid reduces to about 1 cup. This makes two 1/2 cup portions. Strain out the onions, add lemon and honey to taste and drink hot. It must be fresh – don’t let it sit overnight. The aroma and taste may seem strange at first, but you get used to it. Three days of this and you’re up and running!

Headache relief. Crushed raw onion is a stimulant and mild counter irritant. Lie down and apply on the forehead to get rapid relief from headaches.

Antiseptic and antibiotic. Sliced onion or onion juice, high in sulfur, can be applied to fresh wounds as an antiseptic. For an abscessed tooth or a boil, apply a piece of onion to that area to draw out infection and encourage circulation for faster healing.

Sprains and bruises. Apply a finely chopped, moistened onion to the area to ease swelling and improve circulation.

Surgical scars. As reported in Journal of Cosmetic Dermatology, onion extract, now available as a gel, can be applied to scars to make them softer, less red, smoother with an overall better appearance.

Hair loss. Onion juice restores hair follicles and improves scalp circulation, thus helping to promote hair growth. Apply freshly-juiced, raw onion juice directly onto the scalp around the balding or thinning area. Massage deep into the scalp and hair roots. Leave on for about half-an-hour before shampooing. Do these treatments everyday. According to a study reported in Journal of Dermatology, in most cases, regular onion treatments will result in improved hair growth within a month or so.