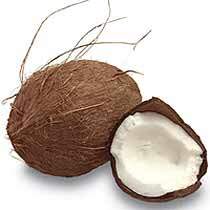 Coconut contains a lot of fat – 82%, 76% of which is saturated, the so-called “boogie- man” of fats which, we’ve been told, clogs arteries and wreaks all other kinds of heart havoc. Thus, we’ve been told, more than a little coconut is bad. BUT that would be wrong!

The saturated fat in unrefined coconut is not the same saturated fat in meat and dairy. Coconut contains saturated fat in the form of medium-chain triglycerides (MCT); in meats and dairy, the fats are long-chain triglycerides (LCT) and therein lies a world of difference. LCT are very difficult to breakdown so the body processes them by hooking them up with molecules that go straightaway into fat cells for storage. MCT, however, are transported directly from the stomach to the liver and immediately metabolized. In fact, the rapid metabolic action set in motion to process MCTs actually burns up more calories than the fat contains! Studies show that people who eat a lot of MCT burn on average 100 extra calories a day more than those who don’t eat an MCT-rich diet. Coconut contains more MCT than any other food, so, contrary to popular perception, the more coconut you eat, the more calories you burn!

And that’s not all that’s good about coconut. This big “nut” (the fleshy fruit of the coconut palm) is a nutrient dense superfood that has been shown to promote brain health, boost immunity, strengthen thyroid function, protect against osteoporosis. Besides aiding digestion and assimilation of fats, all those MCTs provide almost instant nourishment and are a powerful energy booster. No wonder coconut palms, called the “tree of life,” have been revered for centuries in Asia, South Pacific, the Caribbean where the equivalent of a coconut a day is eaten as coconut water, milk, oil, and “meat.”

A note on terms: Coconut water is the clear liquid inside the immature coconut, a very popular drink with high potassium and mineral content. Coconut milk is made with shredded coconut “meat” and water, originally laboriously squeezed to extract “milk,” now usually mixed in a blender and strained. The “milk” can be used in curry, rice, breads, meat, sauces, even cocoa instead of cow’s milk. Unrefined, extra virgin coconut oil has a high smoke point (higher than olive oil) and lasts about 2 years without refrigeration, so it’s great for cooking or just eating raw by the spoonful. (Refined coconut oil, long favored by the food industry because of its slightly longer shelf life and lower production cost, is hydrogenated, creating trans fat and implicated in all kinds of health problems.). Coconut flesh, of course, can be eaten fresh, dried or grated to liven up just about anything – curries, vegetable dishes, puddings, rice, all kinds of confections. It is best eaten fresh – preferably right after climbing the coconut palm tree!

Weight reduction and stabilization. In studies comparing diets with an equal percentage of protein, carbs, and fats – but one group getting more fats from meat (LCT), the other, more from coconut (MCT) – after several weeks, the MCT-eating group burned up about 45% more calories than the LCT-eaters. In a Brazilian study, researchers compared 2 groups: 1 took soy oil supplements, the other coconut oil. After 3 months, both groups lost weight but those on coconut lost weight particularly in the abdominal area. Fat concentrated in the abdominal region has been shown to increase the risk of heart disease and stroke. The coconut oil group also had increased HDL (“good cholesterol”). Once target weights are reached, studies find that unrefined coconut oil in the diet helps maintain healthy weight.

Antibacterial. About 50% of the fat in coconut oil contains MCT lauric acid, a compound otherwise only found in such large quantities in breast milk. According to research, lauric acid kills off several types of disease-causing bacteria, e.g., staphylococcus aureus, Streptcoccus, Enterobacter, coccus. It protects against urinary and throat infection, gum disease and cavities, gonorrhea, etc.

Alzheimer’s. Animal studies have found that menopausal lab animals fed coconut water had higher blood levels of estrogen and less destruction of brain cells compared to control groups. The conclusion: coconut has “estrogen-like characteristics” and may play a role in preventing Alzheimer’s and other types of dementia in the aged.

Osteoporosis prevention. Coconut supports healthy bones and teeth by improving the body’s ability to absorb calcium and magnesium. Thus, it protects against osteoporosis, a condition in which the bones lose their density, becoming thin and fragile.

Pain relief. A popular tea in northeast Brazil made from coconut husk fibers is used to treat several inflammatory disorders. As reported in Journal of Ethnopharmacology, tests showed it reduced inflammation and relieved pain in the same way as morphine.

Skin and hair care. Coconut oil, applied externally, supports the natural chemical balance of the skin, softening and relieving dryness and flaking, preventing wrinkles, sagging skin and age spots, providing protection from damaging effects of ultraviolet radiation from the sun. The oil, used in shampoos and conditioners, promotes healthy hair and helps control dandruff. In many tropical countries, the pure oil is massaged into hair before washing as a pre-conditioner to keep hair soft and shiny.