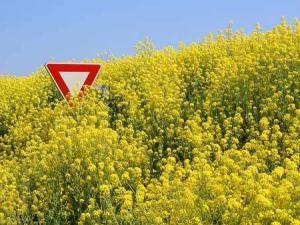 The food industry tells us that canola oil, like olive oil, is rich in monounsaturated fats, low in saturated fats, high in omega-3 fatty acids and, therefore, beneficial for the prevention of heart disease and protection of overall health.

Detractors say that canola oil is poisonous, derived from an industrial oil from which mustard gas (used in chemical warfare) was made, and containing hemagglutinins and toxic cyanide-containing glycocides, which can cause mad cow disease, blindness, nervous disorders, clumping of blood cells and immune suppression.

The truth about this low-cost, heavily marketed “healthfood” is not either of these extremes, but there are plenty of reasons to stay away from canola oil.

Where does canola come from?

However, in the 1980s, the bogus theory (pushed by the food industry) that saturated fats were “bad” and polyunsaturated vegetable oils, like corn and soybean, “good” for the heart, was falling apart. Studies were revealing that high consumption of processed vegetable oils was causing inflammatory health problems associated in particular with heart disease and cancer. The industry, rather than admitting theyre vaunted fat theory was wrong (and unable to make high profit margins with traditional healthy fats), jumped on monounsaturated oils like olive oil, a mainstay in the Mediterranean diet credited with the low rate of heart disease in that region. But there was not enough olive oil to meet demand. The hunt was on for a less expensive monounsaturated oil.

Voila! Canola was born! Rapeseed oil, a major Canadian crop, was 65% monounsaturated (olive oil 70%), abundant and cheap. Unfortunately, it also contained 2/3 fatty acids with erucic acid. The Canadian government saw an opportunity to export their massive crop of rapeseed by breeding a variety high in monounsaturated fats and low in erucic acid. At first, they called the new product, LEAR oil for “low in erucic acid rapeseed” but the imagery, not to mention the word “rape,” did not evoke the right salubrious image marketers were looking for. Finally, some clever soul came up with the name Canola oil (“Canada” plus “oil”) which seemed to have just the right benign-sounding ring.

Starting in the 1990s, Canola was heavily marketed in the U.S., especially to health conscious consumers, with the big buzz words “high in omega-3s,” “heart healthy,” “good for the immune system,” “low in cholesterol” and, of course, relatively cheap compared to olive oil. It didnt take long for health gurus, cookbooks, magazine articles to call for olive oil or canola as equals in recipes, great for all purpose frying, in margarines, junk foods, etc. The public largely fell for it and food processors were back in the oily game! BUT the long-term studies showing whether canola oil was actually safe or effective for humans were nowhere to be found.

Whats wrong with the way canola oil is produced?

In order to market the new product in the U.S., it had to obtain GRAS (generally recognized as safe) status by the Food & Drug Administration (FDA), which rapeseed was never granted. Usually, the GRAS rating goes to food or herbal products with no history of adverse effects. Canola, however, was a new product, though derived from a banned product, rapeseed. However, suddenly, in 1985, GRAS was granted to canola oil. To date, it is still not known exactly why, though the rumor mill has it that the Canadian government, as a result, had a $50 million deficit in their treasury.

Since 1995, most canola oil (about 82%) is genetically engineered to contain bacterial DNA that would make it resistant to toxic herbicides like Monsantos Roundup. Moreover, because Monsanto owns patents on Roundup-Ready canola seed, farmers can be sued for not using the seed or having “unauthorized” canola plants in fields. It is also nearly impossible for farmers (including organic) to battle the superweeds that are evolving in response to the constant massive doses of Roundup.

The refining of canola oil from these seeds involves an exhaustive process of caustic refining, bleaching, degumming – all of which require high temperatures and chemicals of questionable safety. Because of the high omega-3s, which easily become rancid and foul-smelling, the process uses a deodorizing process that turns a large portion of these into trans fats which are not listed on the label! This hydrogenation process can produce levels of trans fats as high as 40% in the final product, which, of course, means longer shelf life, but increased dangers of chronic disease. The consumer has no clue of this because trans fats are not listed on the label – only the original omega-3s!

Why is canola bad for the body?

Canola oil may be high in monunsaturates, but it is still relatively high in dangerous polyunsaturated fats (28-35%), with only a minimal amount of saturated fat. When saturated fats are added to the diet, the undesirable effects of canola oil are mitigated, but in and of itself, Canola has little if anything to offer healthwise:

The public is not alerted to independent studies that do not support the health claims of canola. Here are just a few:

When rapeseed oil was used in cooking in early times, it was unrefined and freshly used in the context of a diet high in healthy traditional saturated fats, like butter, raw dairy, grass-fed meats, coconut oil, etc., so the effect of erucic acid was mitigated. Today, canola oil, runs the risk of increasing inflammation in the body due to the foreign, genetically-engineered DNA, trans fats and chemical residues from processing and the lack of healthy saturated fats vilified for far too long by shills of the food industry..

The Canola story is just another sad chapter in the now debunked myth of low fats for heart health. Thanks to Weston A. Price Foundation and many other independent scientific studies, we now know that a diet of good quality saturated fats is absolutely essential for the health of the whole body, especially the heart. Using monounsaturated or polyunsaturated fats as your primary source of fats is a recipe for severe chronic disease. Perhaps a little canola every now and then wont kill you, but why bother when youve got actual healthy fats – real foods – created by Nature for the nourishment of living beings, rather than imitation foods invented in a laboratory for the purpose of maximizing profit.

“The great Con-ola” by Sally Fallon and Mary G. Enig, PhD
“7 Reasons to Never Eat Canola Oil” – EmpoweredSustenance.com
“Why Canola is Not Healthy” by Roxanne McDonald
“Canola Oil: When a Great Oil Isnt So Great After All” by Dr. Mercola