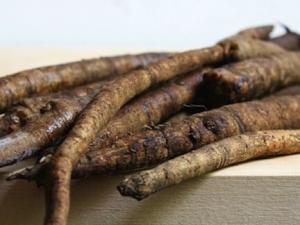 You’ve probably seen burdock in the produce section of your health food store — gnarled, rather grungy-looking roots that don’t look particularly exciting to the taste buds (though the taste is actually quite pleasant). But beauty is way more than skin deep and this one’s got a whole lot to offer, e.g., as a blood purifier, lymphatic strengthener, natural diuretic, skin healer, a defense against diabetes, cancer, arthritis, etc., not to mention being the inspiration for Velcro AND a possible aphrodesiac!

Burdock — roots, flowers and other plant parts — has been used in Chinese medicine for thousands of years, and more recently as a staple in Western herbal practice. In European folk medicine, an infusion of the seeds was often employed as a diuretic to support digestion and elimination. But it is the roots, dense with vitamins, minerals and antioxidants, that have been found to be most beneficial for health.  They are a rich source of calcium, iron, copper, chromium, magnesium, manganese, phosphorus, potassium, silicon, sodium, sulfur, zinc, thiamine, as well as vitamins A, B-complex, B1, B2, B3, B6, B12, C and E, fiber, protein, essential fatty acids, mucilage, and more.

The inspiration for Velcro, the hook and loop fastener, came from burdock burrs. In 1941, a Swiss engineer went for a walk in the woods and wondered if perhaps the burrs that naturally attached to his trousers and dog could be used for some higher purpose. After 8 years of research, he came up with the now widely popular strips known as Velcro.

As for the aphrodisiac possibilities, burdock root was touted as such in early times, though evidence is scant. A 2012 study on males rats found that the extract of the root did enhance sexual function and increased sexual behavior of the animals. More study is needed on humans.

Burdock root is generally considered safe for most people. However, pregnant women should avoid it because is may harm the fetus. Also, anyone sensitive to ragweed, daisies or chrysanthemums, could experience an allergic reaction — e.g., red, swollen, itchy skin symptoms — if burdock is taken. Because of burdock’s diuretic properties, people who are dehydrated should not take it as the dehydration could be worsened. Anyone on diabetes medication should avoid burdock as it could lower blood sugar to dangerous levels. Also, burdock can slow blood clotting, so avoid if using blood thinning meds which could increase the risk of bruising or bleeding. When taken as a tea instead of in food dishes, burdock is more intense. Drink no more than 2-3 times a day for short periods of time. Finally, take care to buy burdock root from established sources, preferably organic, in order to steer clear of possible contamination with harmful herb roots like belladonna, which resembles burdock root.

Blood purifier. Burdock helps clear the bloodstream of toxins and contains active ingredients that can detoxify heavy metals from the blood, which improves organ health and the health of the whole body. Circulation to the skin surface is also improved, enhancing skin health.

Natural Diuretic. Diuretics stimulate the kidneys to rid the body of excess fluid that contains waste. So in consuming burdock root, a natural diuretic, you are increasing urine output, helping to remove waste from the blood and bodily tissues. Burdock tea is a strong diuretic, so, as mentioned, take no more than 2-3 times a day for short time periods.

Skin healer. Many topical creams or ointments contain burdock root to mitigate skin issues like acne, eczema, psoriasis. The herb is known to calm and heal these problems. Including burdock root in various food dishes has helped many people improve skin problems because of its blood-cleansing abilities. Burdock extract has been found to have anti-aging skin abilities. In one 2008 study, topical application of natural burdock extract led to significantly improved skin health and visible wrinkle reduction. Look for burdock root being included in more skin care products, especially for mature and dry skin.

Prevention and treatment of cancer. Burdock contains powerful antioxidants, such as phenolic acids, quercetin and luteolin, substances that help protect the body from free radicals which are unstable molecules that damage healthy cells. Studies have shown that such antioxidants can slow tumor growth. Other phytochemicals, like arctigenin are shown to be cancer specific and can kill cancer cells, particularly in cases of lung, liver and stomach cancer. Burdock is one of the herbs found in Essaic, an anti-cancer tea formula derived from native Canadian cultures that is now recommended by many alternative doctors.

Diabetes defense. Burdock root contains inulin, a soluble, prebiotic fiber that aids digestion and lowers blood sugar. Thus, it is a natural aid to managing blood sugar. It also has shown the ability to decrease the severity of diabetic complications, especially diabetic retinopathy.

Arthritis improvement. Burdock root is a good dietary addition for arthritic patients because of its strong anti-inflammatory properties. A study in the International Journal of Rheumatic Diseases found that burdock root tea lowers inflammation  and oxidative stress in patients with knee osteoarthritis, otherwise known as degenerative joint disease.

Treats enlarged spleen. The spleen is a vital “guardian” organ that helps keep the body free of infections, viruses and all manner of dangerous pathogens. An enlarged spleen is a warning sign that the immune system is fighting hard to remove these invaders from the body, but having difficulty keeping pace with the high demand. The spleen is in constant contact with the bloodstream, so as burdock root naturally purifies the blood, it is also cleansing and protecting the spleen. This improves blood quality and liver health, so the spleen doesn’t have to work so hard to remove unwanted material.

The root should be cleaned well by rinsing and scraping the outer skin or removing it. The cleaned, dry roots can stay fresh for several months in a cool, well-ventilated space. Otherwise, slices should be stored in the refrigerator and used as soon as possible. Burdock goes well in a vegetable stir-fry, stew, soup or as a medicinal tea. Or you can eat it raw with a little sea salt or pickle it.

Some people like to forage wild burdock root, but this can be risky. The roots can store toxins so be sure to pick well away from roadsides and industrial areas that might have been sprayed with pesticides. You want to be 100% sure you know what burdock looks like when it comes to picking the wild plant. People can mistake young burdock for toxic herbs like belladonna or  foxglove. You’re probably wiser to buy fresh burdock root at a trusted store.

Buckwheat Is Not Wheat
Next Post: Kudos for Cabbage! »