Does Apple Cider Vinegar Each Day Keep the Doctor Away? 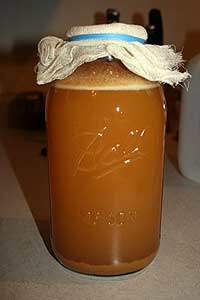 Raw (unpasteurized) Apple cider Vinegar (ACV) has been used for healing by most all civilizations going back at least 10,000 years. It’s been touted as a cure for just about everything from coughs to constipation to cancer. But is there any truth to all the lofty claims?

The fact is, not a lot of scientific research has been done on ACV because, not surprisingly, there’s not much commercial interest in investigating natural remedies. The big money is in patenting drugs made from synthetic materials. But the few studies that have been done, as well as the weight of historical and anecdotal evidence, show that ACV can be, indeed, quite a useful thing to have around for humans, as well as animals, internally and topically, for a variety of situations like managing type 2 diabetes, skin and stomach problems, infections, sore throat, cough, arthritis and much more.

The source of ACV’s power is rather a paradox. It’s relatively low in the usual valued vitamins, minerals, amino acids and other nutrients and contains no measurable soluble or insoluble fiber. It appears that it’s beneficial effects derive from the fact that the diluted acid in ACV, acetic acid, helps the body maintain an ideal pH 5-7. A healthy acid/alkaline balance creates a strong internal environment that aids digestion, destroys pathogenic bacteria, and stimulates the growth of beneficial gut bacteria that enhance overall body function.

Where and How to Buy ACV?
ACV can be found in most all health food stores or online. Look for the raw, unpasteurized kind made from cold-pressed, organic whole apples, like Braggs, which have an acidity (pH) level 5-7 and a dark, cloudy web-like bacterial foam called mother. Natural vinegars that contain the mother have enzymes and minerals that typical commercial types lack due to over-processing, over-heating, filtration.  You want the murky, brownish-looking stuff; stay away from the clear.

Caveats
There are no major known side effects to ACV when used in moderation. However, drinking vinegars, acids or even lemon juices undiluted on a regular basis can lead to a deterioration of tooth enamel or possibly burn the delicate mucus membranes of the digesting tract. Always dilute ACV in water or juice or mix with oil in a salad dressing.

People with allergies to apples should avoid ACV.

ACV may have additive effects with certain pharmaceutical medications. Check with doctor before using ACV along with drugs like Lanoxin (digoxin), insulin, laxatives, diuretics such as Lasix (furosemide), blood pressure medications.

How much to take?

If you’re new to ACV, it’s best to start with a smaller amount and work up gradually to the suggested dose. To help with the taste you can always add a little raw honey. For general balancing: 1-2 tsps. in 8oz. of water several times a day. For acute conditions: up to 2 tablespoons in 8 oz. several times a day is recommended. It’s best taken before or in between meals.

Results of Scientific Studies on ACV

Clearly, more research is needed. But here’s a sampling of results thus far:

Type 2 Diabetes: This is perhaps the most researched and promising area of ACV’s benefits. Several studies have found that vinegar may help lower blood glucose levels. A 2004 study, reported by American Diabetes Foundation, concluded that taking ACV before meals significantly increased insulin sensitivity and dramatically reduced insulin and glucose spikes after meals. Those with pre-diabetic symptoms benefitted most — cutting their blood glucose concentrations nearly in half. People with diabetes improved blood glucose levels by 25% and people with pre-diabetic symptoms had lower blood glucose than healthy participants after both drank the vinegar. An unexpected side effect: moderate weight loss.

Research has also shown that ACV normalizes other aspects of blood chemistry in humans and animals when consumed as part of a regular diet for at least 4 weeks.

Food poisoning. In a study in Journal of Food Protection, various solutions were sprayed on lettuce containing E.coli bacteria. ACV was most effective in reducing the numbers of bacteria without affecting the taste or crispness of the lettuce.

Weight Loss Aid. According to research in European Journal of Clinical Nutrition, ACV, taken regularly before meals or at bedtime helped weight loss in obese individuals.

Oral infections. A study in Oral Surgery, Oral Medicine, Oral Pathology, Oral Radiology and Endodontics found that ACV showed anti-bacterial activity against E.faecalis, a bacteria linked to infection in root canals and elsewhere in the body.

Blood Pressure. A 2006 study showed that the acetic acid in ACV lowered blood pressure in rats.

Anti-cancer. There has been some positive preliminary research suggesting that ACV can help prevent cancer by killing cancer cells or slowing growth. But there have also been conflicting results, so more study is needed. Best to eat an apple a day or just take the general ACV tonic — 1-2 teasp. in 8 oz. water several times a day.

Over the centuries, ACV has shown itself to be a valuable multipurpose home health tool, internally as well as topically. Here are just some of the more common uses:

Apple cider vinegar is not a miracle cure-all. But used in moderation, it has a long history  as a handy home health aid and, possibly, with more scientific scrutiny, a valuable agent for prevention and healing of major illnesses.