The benefits of daydreaming. 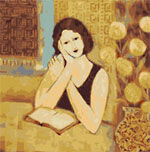 There is nothing wrong with spending vast quantities of time fantasizing about imaginary realities far away from the cheerless hardships of modern life. The problem is that people are daydreaming incorrectly. Because of widespread misuse, daydreaming has achieved the rank stigma of slothful procrastination.

When most people need a break, they take out their cellphones and begin pushing buttons to command avatars to run, jump and shoot other avatars. This is not daydreaming. Your brain is tired, tired in subconscious ways you cannot even fathom. Forcing it to survive labyrinths or shootouts or car chases serves only to wear it out even more. And television, Web browsing, scab and fingernail landscaping – these are simply distractions.

But when used correctly, by following these simple guidelines, daydreaming can reduce stress, improve productivity and help you be a lot more fun to be around the rest of the day.

It counts as daydreaming only if you are staring into space or at the nearest wall.

Never schedule your daydreaming. Rather, allow it to occur organically, like drooling. A good time to daydream might be just before lunch, or during a meeting, or in the middle of a conversation that has hit a lull. Let’s say about 91% of conversations become boring after about 7 seconds. This is a good time to give your brain a rest and start daydreaming. Most speakers, consumed with their own self-importance, will continue talking while you take a well-needed timeout.

Daydreaming is best accomplished in the midst of stillness and should be banned from public transportation. Sociologists would agree that a majority of stabbings on public transportation – a result of people’s standing in front of subway doors or mindlessly taking up more than one bus seat – can be traced back to incorrect daydreaming coordinates. Daydreaming should also be banned from any waiting line. Waiting to purchase train tickets, order lunch or deposit checks in an ATM machine – these all are hazardous daydream locations.

Bathrooms are good daydream spots. Also, under trees, at or beneath one’s desk are secure areas to allow the mind to drift.

“I want to daydream more, but I don’t know what to daydream about,” a lot of people probably say. For that reason, they keep rehashing the same old daydream scenarios:

Daydreaming about being a better person, or positive things happening to loved ones, or flying through the office on a dragon that thinks one of your co-workers has stolen her dragon things – these are all dynamic mental breaks that can prepare you for an afternoon of cheerfully cleaning lint out of your keyboard. To become an efficient daydreamer, you needn’t dwell on quantum mechanics or solve complex algorithms; you simply need to blow off a little steam so you don’t get overstressed and have a nervous breakdown in front of your computer screen.

What type of fast food will the aliens prefer when they arrive and will it be the ultimate undoing of their civilization? If you were living in a world of all puppets, could you just assume you would be in charge because you’d be smarter and stronger and all fleshy? Or would you be ridiculed because of your minority non-puppet status? What if someone invents a machine that can read trees’ thoughts, and it turns out they spend the day laughing at us? Or what about just focusing on a leaf or a flower and letting whatever thoughts bubble up out of your head? These are some solid, intellectual quandaries for your next daydreaming stint.

In closing, do not daydream about the problems in your life, the evil in the world, the troubles around the next bend. That is what real life is for. Instead, daydream about things that make you smile. No summer workday is complete without a grown person staring into space, looking vaguely amused.

Previous Post: « Good Things You Can Do for Your Body & Mind? (That don’t Cost an Arm or a Leg!)
Next Post: How to Simplify Your Life By The Rev. Webb Garrison »