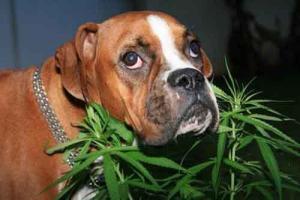 Now that medical marijuana (cannabis sativa) is legal in 29 U.S. states and the District of Columbia (including the 4 just added in the November election), perhaps it’s not surprising that humans are not the only ones experiencing the therapeutic virtues of this age-old plant.

Animal lovers who may or may not partake of marijuana themselves, are turning to cannabis-based products to alleviate a host of their pets’ maladies, including seizures, inflammation, anxiety and pain, arthritis, loss of appetite and nausea -0 and they are reporting impressive results. Moreover, the treatments are being used not only for cats and dogs, but also pigs, horses, and domesticated wild animals.

All of us, including animals (with the exception of insects), are endowed with an endocannabinoid system which is perhaps the most important bodily system for maintaining homeostasis. Cannabinoid (CBD) receptors are found throughout the body: in the brain, organs, connective tissues, glands, immune cells, etc. When these receptors are stimulated with certain phytochemicals called CBDs (biologically active compounds found in plants), the net effect is a stable, balanced internal environment resistant to disease.

As discussed in our recent article, “Cannabis -0 the New “It” Plant,” many strains of the
marijuana plant are now being bred to contain a high concentration of CBDs, the chemicals which positively stimulate these receptors. The plant also contains THC, the chemical compound responsible for the psychoactive “high” effect. Research has shown that the presence of a high ratio of CBDs relative to THC packs the most potent healing power, though it does not produce the “high” found in recreational use (high THC strains).

Important note: Animals, especially dogs, tend to be very sensitive to the effects of THC, so only the low THC strains are indicated. If you use marijuana recreationally, i.e., the “high” inducing variety, do not use this type with your pet. As some owners have inadvertently found out, you could end up rushing your animal to the vet!

Cannabis for animals has not been officially approved by regulators and veterinarians are not allowed to write prescriptions. However, where medical cannabis is legal, many humans seem to find ways to obtain the treatment for their beloved pets. For instance, in California, where medical marijuana has been legal for nearly 2 decades and restrictions are relatively liberal, a person must obtain a card designating a malady in order to get the substance. A woman, who said she doesn’t smoke pot or drink, wanted to get it for her dog who had cancer, so she told the doctor she needed it for her insomnia. Another woman thought her 14-year old cat, Bart, who has arthritis in his front legs, could benefit, so she told the doctor she had aches in her knee and shoulder. Other pet owners in California, have found the plant effective for complex pet problems, like fear-based anxiety, surgical complications.

In states where cannabis is not legal, many people are turning to hemp, a member of the cannabis family with somewhat different chemical composition. Industrial Hemp is legal anywhere in the country to buy because it contains negligible amounts of THC (no more than 0.03%) and, thus, does not produce a “high.” It is also subject to restrictions that make growing it in the U.S. problematic, so much is imported. But hemp oil and other plant parts do contain substantial amounts of CBDs which offers healing potential. This may be the safest way to go with pets who could have toxic reactions to THC.

Though hemp may not be the most potent form of cannabis for people, a new industry of hemp-based products for animals is blossoming and proving to be effective, particularly for issues like separation anxiety, itching, joint mobility, flexibility. These products are usually edible chews, powders or oils which contain other high quality ingredients, often organic. The cost is similar to prescriptions drugs: about $20-40 a month. A few examples:

Clearly, cannabis and its cousin, hemp, have healing potential for both humans and animals and without the toxic side effects of pharmaceutical drugs. But more study is needed to determine best uses and protocols, made more difficult because the federal Drug Enforcement Agency (DEA) continues to list cannabis among the most dangerous drugs on Schedule 1 of the Controlled Substances Act, mostly on the grounds that not enough studies have been done! So the ban limits research and the lack of research prolongs the ban!

Why is it that our federal government is relatively quick to approve synthetic drugs that have questionable efficacy and documented, often lethal adverse effects (while being generally available through insurance), yet, when a natural substance, like cannabis -0 shown to be effective in many cases, nontoxic, with no side effects -0 always seems to require more study before the public is allowed ready access? Hopefully, as more and more states approve medicinal use, our federal officials will act to remove cannabis from the Controlled Substance Act and repeal federal criminal penalties for possession. Until then, people will continue to be creative -0 in possibly risky and expensive ways -0 in their quest to avail themselves and their pets of this wonderful healing plant.