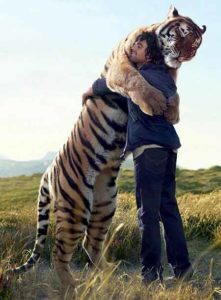 Here’s a therapy that energizes the immune system, lowers blood pressure, reduces anxiety, encourages sleep, increases compassion and feelings of well-being, and has no negative side effects. And the more you engage in this kind of treatment, the greater the benefits.

It’s called “hug therapy.” Despite the lack of a long scientific-sounding name, this is quite a well-researched area of healing. Scientists have found that hugging/touching plays an essential role in the emotional and physical health of humans (and likely all living creatures), triggering the release of “feel good” hormones like dopamine and oxytocin and reducing the production of cortisol (the “stress” hormone) in your body.

All cultures down through the ages have engaged in some form of casual touching or hugging, but people in Western societies have traditionally under used this modality. In 1974, a psychologist, Sidney Jourard, measured touch among friends in 4 countries: U.S., England, France and Puerto Rico. He found that in England people essentially did not touch at all in daily social situations. In the U.S., friends touched up to twice an hour. In France, friends touched up to 110 ties an hour and in Puerto Rico, they touched up to 180 times an hour!

Perhaps the low levels of touching have something to do with the feelings of alienation and pessimism that pervade modern industrial populations. Studies show that there is a direct correlation between the number of hugs you give and get and your sense of social support and optimism. Researchers have also found that those who had more frequent hugs — giving and getting — had less severe symptoms of conditions like the common cold. Researchers postulate that this may be because the pressure of a hug can stimulate the thymus gland, a primary gland of the immune system that regulates white blood cells. It is located in the upper chest, between the sternum and the lungs.

The fact that hugs reduce cortisol and perceived stress, also lowers heart rate which may lower the risk of heart disease. The Touch Research Institute (TRI) at the University of Miami School of Medicine has concluded from many studies that touch reduces pain, due to increased release of dopamine, a hormone that elicits feelings of pleasure, along with endorphins and serotonin that help reduce pain and feelings of sadness. Other touch studies at TRI found lowered glucose levels in diabetic children and enhanced immune function in cancer patients.

Some of the finer points of hugging:

Perhaps one day the doctor will say, “Just take a few hugs and call me in the morning!”