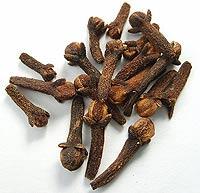 Cloves (Eugenia caryophyllus), the dried flower buds of an Asian evergreen tree, look like crude-shaped nails — so no surprise the word “clove” comes from the Latin clavus, meaning “nail.” The Chinese wrote about this pungent, slightly sweet tasting spice as early as 400 B.C., including records of courtiers told to keep cloves in their mouths to avoid offending the emperor while addressing him. Today, the custom continues in Asia where cloves are often used as an after-dinner breath freshener but clove has secret medicinal properties

This is one of the most penetrating spices on the planet. Eugenol, the oil of clove, is so powerful, if you apply it to skin, you’ll get an instant rush of localized numbness, making it especially useful for toothaches. The oil is a mild anesthetic, as strong as benzocaine, the chemical commonly used to numb oral tissue before the dentist sticks in a needle. But clove has much more to offer than dental relief. A multi-purpose remedy, it is effective in an impressive array of situations like improving digestion, aiding childbirth, fighting infection and dissolving blood clots.

Cloves are native to the Malukus (“spice islands”) of Indonesia, but the best, penang cloves, come from Malaysia, followed by Zanzibar and Madagascar. In the U.S. most come from Madagascar or Brazil.

Freshness, however, is more important than origin. Buy whole and grind yourself. Once ground, they start to loose their volatile oil, which weakens their aroma and healing

powers. When buying, look for large cloves, that is, you can clearly make out the head and stems. In fact, you should be able to recognize the four would-be petals of the bud and the stamen inside them forming the nail-like head. You don’t want to buy cloves that look like little bits of sticks; those are just stems. Color should be reddish-brown. Whole cloves will keep for a year or more in an airtight container away from light and heat.

The Medicinal properties of clove are high and wide.

Teeth and Gums: Eugenol (oil of clove) is formidable medicine against many forms of oral discomfort and disease. It acts as an analgesic to reduce pain, an anti-inflammatory to lessen redness and swelling, an anti-bacterial, killing germs. The oil fights gingivitis, the early stage of gum disease when gums are inflamed, and periodontitis, the later stage when gums recede and bone erodes. It’s also effective against stomatitis, a painful inflammation of the mucous lining of the mouth, caused by factors such as medications, poor dental hygiene, or ill-fitting dentures. Rub several drops of oil around a painful tooth or tissue so blood vessels near the gum dilate and circulation increases with a warm, soothing sensation.

Cloves are not, however, a cure for cavities. Use the oil for pain relief until you can make a trip to the dentist!

A hot tea made with cloves, bay leaves, cinnamon and majoram helps relieve bronchitis, asthma, coughs, as well as the tendency to infection. This combo is also effective against tuberculosis, altitude sickness, nervous stomach, nausea, diarrhea, flatulence, indigestion, dyspepsia, gastroenteritis, the side effects of lobelia, and depression.

Mosquito repellent: Clove oil beats citronella candles vs. mosquito bites. Thai researchers enlisted volunteers to stick their forearms into an area dense with mosquitoes. Only a few essential oils protected against bites, including citronella, patchouli and clove, providing two hours of “complete repellency.” When these oils were retested, only clove oil gave “100 percent repellency” for 4 hours.

Blood clots: Blood clots that plug arteries are the cause of most heart attacks and strokes. Clots are caused in part by platelet aggregation – plate-shaped blood cells become sticky and clump together. Danish researchers tested eugenol against two “blood thinning” medications that fight platelet aggregation – aspirin and indomethacin (Indocin) – and found eugenol more effective than aspirin and equal to indomethacin.

Anti-Cancer: There is growing scientific awareness that many spices possess anti- carcinogenic properties and clove appears to be among them. Studies on animals with lung and skin cancers show that eugenol can stop cancer cells from multiplying. More research is needed.

Women’s health: The antispasmodic properties of clove make it helpful in preparation for childbirth. The herb helps to relieve muscle spasms, make contractions stronger and aid in labor.

Skin problems: Due to its anti-microbial and anti-fungal properties, clove oil is an ideal remedy for acne, warts and scars.

Type 2 diabetes: Studies have shown that consuming a clove or two a day can help normalize insulin function by lowering blood glucose levels, as well as reducing cholesterol.

Some folk remedies: For insomnia: drink a tea with cloves and water before bedtime. An aphrodisiac: in India, clove — eaten or smelled— is considered a powerful aphrodisiac. For headaches: clove acts as a stress reliever; a little salt is mixed with clove oil and rubbed on the forehead and temples. For earache: put a little warmed oil of clove on a piece of cotton and in the ear.

Using Clove In the Kitchen

Clove is a common culinary spice around the world, especially in spice blends, such as five spice powder (China), garam masala (India), quatre épices (France), ras-el-hanout (Morocco), and baharat (Ethiopia). The French stud onions with cloves to flavor stocks and stews. Germans add it to pot roast and other long-cooking meat and game dishes, while the British put cloves in Christmas pudding and apple tart, mulled wine and cider.

In the U.S., where over 1,000 tons are imported every year, cloves are common in both sweet and savory dishes: to stud hams, in apple spice mixes, mulled wine and warm punches, pickled eggs, soused herring, homemade sausages and Christmas fruitcakes. Clove adds distinctive flavor to Worchestershire sauce and is reported to be one of the “secret” ingredients in Heinz Ketchup.

Less is more! Cloves have a distinctive, sharp woodsy, sweet and musty taste. Be careful not to overpower a dish with them. Takes only a few whole cloves in a pot of stew or ground to flavor pastry. Whole cloves should be removed before serving. One way to avoid a surprise clove crunch, stud a small onion with cloves and add to the broth; retrieve the onion at the end.

The largest share of the world’s cloves goes into the popular Indonesian cigarette called Kreetek. These contain 40% clove and give the cigarettes a crackling sound as they’re smoked.

As you can see, the medicinal properties of clove are huge so why not read more about it and how it can help you to maintain a healthy lifestyle.